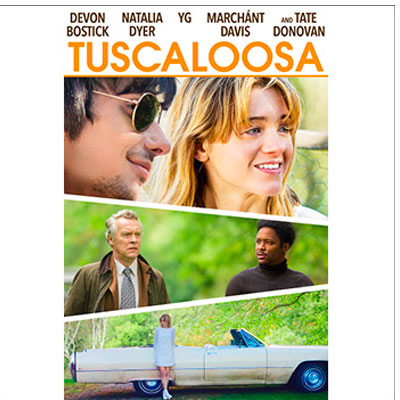 Presented by Paramount Center for the Arts at Paramount Theatre

The Paramount Center for the Arts is pleased to present a special screening of the 2019 film, “Tuscaloosa.” Philip Harder (Director), Patrick Riley (Executive Producer) and Erik Helgeson (Executive Producer) will be hosting a Meet & Greet in the lobby prior to the screening and a Q & A following the film. Don’t miss this unique opportunity to see a film at the Paramount and talk with the creators!

1972. Vietnam war protests and racial tension is sizzling in the late summer heat of Tuscaloosa, Alabama. Billy Mitchell (Devon Bostick, Diary of a Wimpy Kid), a recent college graduate, spends the summer working on the lush grounds of an old world mental institution run by his psychiatrist father (Tate Donovan, Argo). Billy falls in love with Virginia (Natalia Dyer, Velvet Buzzsaw, Stranger Things), a patient who is possibly crazy, or perhaps she is the only sane person Billy has in his world. Billy’s best friend Nigel (Marchant Davis) becomes involved with a radical civil rights terrorism movement against Tuscaloosa’s power elite, which includes Billy’s father. Billy is torn between Nigel, his father and his cronies, and Virginia who is planning her escape with or without Billy. —Patrick Riley